Hell’s Kitchen Season 16 Episode 3 Recap: “The Yolks on Them”

Since the season premiere of Hell’s Kitchen season 16, the Blue Team has been unable to get their act together on Hell’s Kitchen Season 16. They’ve lost two of their chefs so far, and have also gone through two disastrous dinner services. On this Hell’s Kitchen Recap of “The Yolks on Them” we’ll get to find out if they’ve gotten rid of enough dead weight to be able to beat the Red Team. 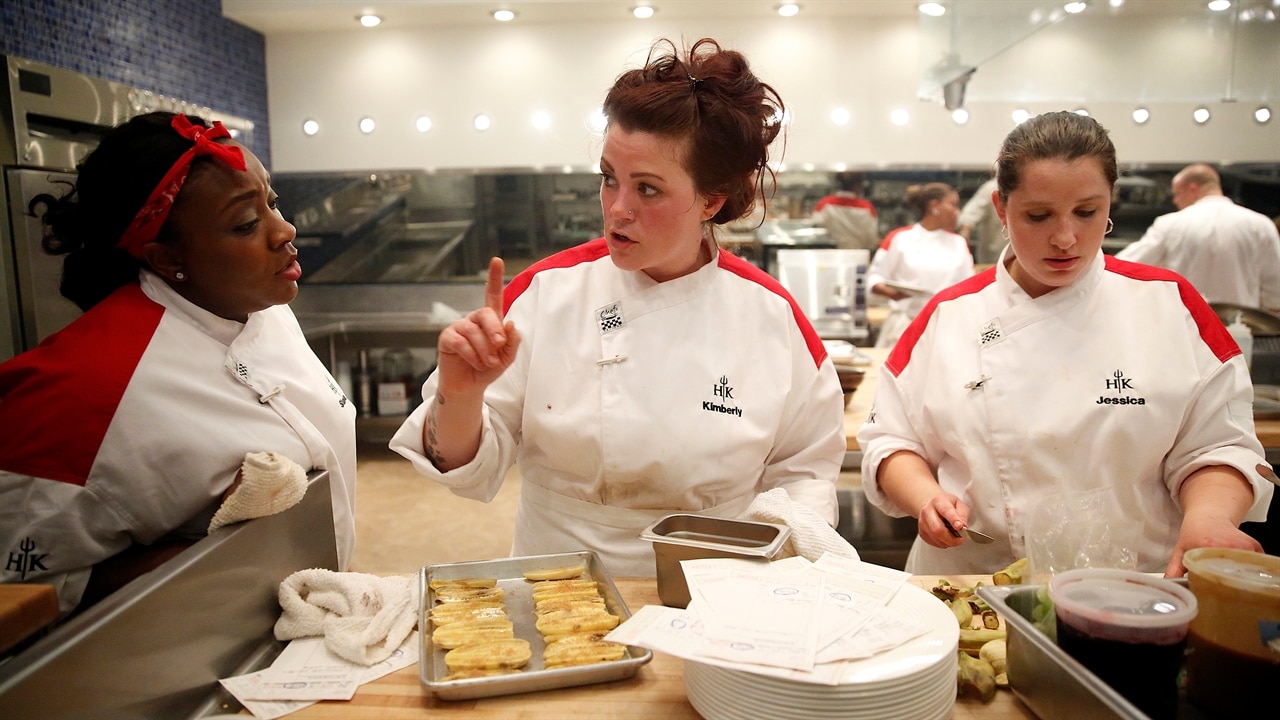 After Genaro was eliminated from the Hell’s Kitchen Season 16 competition by Chef Gordon Ramsay, the remaining Hell’s Kitchen chefs head back to their dorms. The Red Team was also very happy that they are dominating the competition on the TV Show.

The Blue Team, however, think that the women are gloating. The men also think that Jessica needs to quiet down. Johnny tells her not to talk to him for the “rest of the f***ing season,” while Andrew also tells her to “shut the f*** up.” All this causes Jessica to break down in her confessional since she says she has never been bullied like this before.

The next day, when the chefs enter Hell’s Kitchen, they see Chef Gordon standing in front of them with lots of eggs around him. Gordon informs them that the eggs are ostrich eggs and that the eggs are not what they will be cooking in the next competition. He told the Teams that instead, they must prepare various platters of ostrich meat. And the only ingredients that will be used are hidden inside of the ostrich eggs.

Chef Gordon then tells them that they had four minutes to break as many ostrich eggs as they can to reveal their ingredients. Although it may seem like fun to smash these eggs, but there too much yolk splattering around, since, according to Chef Gordon, ostrich eggs are two times bigger than chicken eggs.

After the four minutes are elapsed, the chefs will also have 40 minutes to make their ostrich dishes. Many of the chefs are nervous since they’ve never prepared an exotic meat as this one. Johnny, on the other hand, was completely confident. “This is gonna be a challenge that I’m gonna kill,” he says confidently.

After making their ostrich dishes, the chefs will then present their dishes to Chef Ramsay and two world-renowned chefs: Frederic Morin and David McMillan. Both teams will face-off in four rounds, and whoever cooks the dish that Chef Gordon and the guest judges deem the best in each round will get to score one point for their team. And the team with the most points out of four rounds wins.

For the first round of Hell’s Kitchen Season 16 episode 3, Ryan’s meatballs and Shaina’s chili face off against Johnny’s burger and chili. And despite all of the confidence Johnny had before going into the competition, Ryan ends up winning the face-off and scores the first point for the Red Team.

For the second round, are Heather, Heidi, and Kimberly from the Red Team, going up against Aaron and Koop from the Blue Team. The ladies also scored their second point, all thanks to Kimberly’s pan-roasted top loin.

Next up the third round are Gia and Jessica taking on Paulie and Andrew. Chef Gordon and the guest judges narrow the face-off down to Jessica and Paulie. If Jessica wins in the face-off, it means the Red Team will win another competition. But luckily for the Blue Team, Paulie’s dish was victorious scoring the first point for his team.

For the last face-off of the competition, Aziza and Wendy went up against Devin and Matt from the Blue Team. Devin was also confident that he will win, but according to Chef Gordon, Wendy’s dish wins “100%.” This win earns the Red Team their final point, which makes them the winners of another competition on the TV Show.

Is Someone Quitting Hell’s Kitchen?

To celebrate their third win in Hell’s Kitchen Season 16 episode 3, Chef Ramsay sends the women off for a day of zip lining in the mountains. The ladies even got to travel to the mountains on a private jet. And for losing, the men from the Blue Team must clean up the disgusting mess from the ostrich eggs left behind from the competition.

While the Red Team continues to bond while zip lining, the Blue Team breaks down even more. While doing their punishment, the men noticed that Matt is nowhere to be found. Aaron then tries to go find him to make him come help them with the clean-up. “Don’t sit back and pout like a little boy,” Aaron says about Matt.

However, Matt refuses to help. He says that he is tired of being degraded by the Hell’s Kitchen judges since they don’t know what they are talking about. Matt even tells Aaron that he is going to pack his belongings and quit the TV competition. The rest of his teammates say that they would not be upset with Matt leaving. “Matt is not a team player. He’s a coward,” Paulie explains.

When Ramsay hears about Matt’s outburst, he calls him to talk in his office. Matt tells Chef Gordon that he believes that he and the rest of the men are not being treated with fairness in the competitions, and so he doesn’t want to stay if everything has being stacked against them. Ramsay talks him off the ledge and also gets him to stick around. He also gives Matt one piece of advice: “Keep your head up.”

Although Matt stayed to help his teammates with the punishment and is not leaving the competition, they are all infuriated with him. This result in a fight between Matt and Johnny, which leaves Johnny saying that he will make sure Matt, goes up on the block for elimination.

On the other side, things are not going so well for the Red Team. Before the start of the next dinner service, the ladies notice Gia just standing around and not helping out to prepare their kitchen. Heather even says that she would not mind losing the dinner service if it means sending Gia home. But Gia hears the whole conversation.

The next dinner service begins with tensions high on both teams. The Blue Team had a good start. Koop made a risotto, which Chef Ramsay loves, and only tells Koop to cut back on his serving size.

The Red Team had a rocky start. Kimberly and Shaina handled the fish station, but Kimberly overcooked the first serving of scallops. She quickly bounces back and helps the ladies to get their appetizers out early.

At the Blue Team’s kitchen, Paulie serves Chef Gordon his scallops, but they are not done. He makes a second attempt at the dish, and it gets burnt. Ramsay doesn’t know how to react to this second failed dish. “I’m trying desperately hard to make you look good. I’m fed up!” He yells to Paulie.

Although he wanted to leave earlier, Matt steps up, helping Paulie to create a successful plate of scallops. The men finally seem to have it as a team.

Back on the Red Team, there is no teamwork. As Gia prepares her lamb, Wendy hopes that she messed it up so they can send her home. However, Gia’s lamb ends up being perfectly cooked, but she quickly crashes and burns. Gia ends up overcooking her next plate of lamb and also messes up her beef Wellington. Her teammates are not happy and have had just about enough of her. “She sucks. We’re ready to get her out of our team,” Kimberly says.

As if things couldn’t get any worse for Gia, she ends up telling Chef Gordon that she cut off part of her finger, leading him to call a medic. But she refuses to show him or the medic the finger until Chef Ramsay forces her to. While everybody watched expecting to see a gory scene, Gia’s finger was fine as was lying about her injury the whole time.

Unlike in previous dinner services, the ladies women do not recover. After their beef Wellington, salmon and pasta and salmon are all improperly cooked, Ramsay tells them to “f*** off” and kicks them out of the kitchen. This only means that the Blue Team has finally won their first dinner service of the season.

When the ladies gathered to figure out who they are nominating, everybody seems to be in agreement that Gia should be sent home. However, they are torn on the second nominee, so Jessica ends up nominating herself as a result of her pasta mishap. But, Jessica is not happy that nobody else volunteered to go up the block since she thinks everyone played a part in the team’s loss.

Things get worse for the Red Team on Hell’s Kitchen Season 16 episode 3. Gia suggested that Kimberly goes up the block instead of Jessica. And when Gia goes back to the dorms to tell Kimberly about this, she overhears Kimberly talking to Jessica, and telling Jessica that Gia will be the one going home. This results in a major blowout between Gia and Kimberly.

After the big fight between Gia and Kimberly, the Red Team reveals their two nominees to Gordon. The nominees were Gia and Jessica. Chef Ramsay was surprised about Jessica’s nomination, and also says that it is not good that Jessica nominated herself. Her teammates reiterates this point by saying that she has nothing left to give.

Things get bad for Jessica when Gia reveals that Jessica has already packed her bags. This was just the final nail in Jessica’s coffin. Gordon sends her home because he feels she is not ready for the grand prize of becoming the head chef at a high-end Las Vegas restaurant.