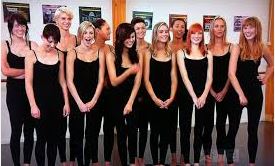 New Zealand’s Next Top Model is also one of the reality TV shows in New Zealand. It is hosted by former model and 62 Models Management founder Sara Tetro, and also and airs on TV3 New Zealand.

The winner of New Zealand Next Top Model wins a modelling contract with Sara’s agency. And just like its American counterpart, NZNTM features an international model and photographer on its panel of judges Colin Mathura-Jeffree and Chris Sisarich, respectively. Colin Mathura-Jeffree also acts as runway coach to the girls, just like Miss Jay on America’s Next Top Model.

The reality TV show focuses on a group of young women living together in a house, and also competing for the title of New Zealand’s Next Top Model and also a modeling contract.

Every week, the girls take part in a challenge and a photo shoot. And after that, one of them is sent home. NZNTM is based on one of the hit reality TV shows in American, America’s Next Top Model.

The TV show was produced/created and hosted by TV personality and talk show host and former model Tyra Banks.

The reality TV series started in America in 2003, and saw early commercial success, and was also first viewed on New Zealand television screens in late 2004.

In America’s Next Top Model, the age range is between 18 – 27. But the New Zealand version of the show targets a younger audience with a lower age range of 18 – 23.

The second cycle was aired on Australian TV channel Eleven.

The show faced some controversy in the third episode of series two, when 16-year-old devout Christian Michaela Steenkamp was modeled topless at a tribal swamp photo shoot. She also said in testimonials aired alongside shots of her half naked in the mud that she was uncomfortable with the shoot.

Fans raised concerns on the appropriateness of a young contestant being shown topless after the episode aired. The TV show also replaced the original photograph of Michaela Steenkamp on their website, where one could see her breasts covered with a bit of nipple tape and nothing else with a newly Photoshopped image with fog covering Michaela Steenkamp’s upper body. The digital “fog” was also added to older contestant Amelia’s photograph. And just like Michaela, Amelia originally posed with nothing but some nipple tape. Other contestants wore nude-colored bandeau tops at the same photo shoot.

In the third cycle of the show, it was revealed that one of the finalists, Rosanagh Wypych had a criminal conviction for drunk-driving. It was also revealed that she failed to disclose a second conviction for driving whilst disqualified which had led to a second court appearance in the week before the final. It is required for contestants to declare any convictions before entering the reality TV competition show.