Dancing with the Stars judges awarded Laurie and pro dance partner Val the first perfect score for dancing With The Stars Season 23. 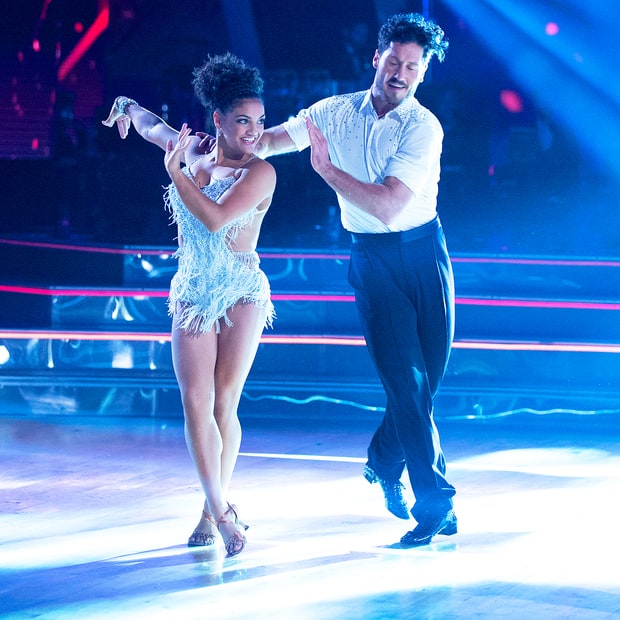 The 23 season of this hit reality TV Show has already shown a clear frontrunner to win Dancing With The Stars Season 23’s mirrorball trophy.

The dance couple finished in first place on Monday night’s leaderboard out of the 11 competing dance couples when they were awarded 30 out of 30 points from Dancing with the Stars judges Julianne Hough, Carrie Ann Inaba, and also Bruno Tonioli during the ABC broadcast.

Laurie and Val have managed to top the Dancing With The Stars Judges leaderboard three times. Their jazz routine earned the first perfect score of the season for the reality TV show’s Cirque Du Soleil Week. Laurie and Val have also in addition to topping the Judges leader board also earned immunity for their face-off last week.

For the second place on the leaderboard, professional race car driver James Hinchcliffe and dance partner Sharna Burgess earned 28 points after taking the dance stage with a quickstep routine.

Also, in respect to the “body-shaming” feud in which Dancing With The Stars Amber believed Julianne had criticized her sexy dance routine last week calling it “uncomfortable” to watch as a result of Amber’s voluptuous curves, both ladies cleared up any misunderstanding and miscommunication.

Dancing with the stars judge Julianne insisted that she’s only on the TV Show to judge the Dancing With The Stars contestants’ dancing and that she’s absolutely not the type of person who would shame or judge or a woman when it comes to body image. Amber appreciated the explanation and also apologized if she had taken the judge’s words out of context.

For Sixth place on the judge’s leader board, it turned out to be a three-way tie of 23 points for the following celebrities: country singer Jana Kramer, Former rapper and The Vanilla Ice Project star Vanilla Ice (formally known as Robert Van Winkle), and also retired NFL wide receiver Calvin Johnson Jr.

Olympic gold swimmer and former What Would Ryan Lochte Do? star Ryan Lochte and pro dance partner Cheryl Burke claimed Ninth place on the leader board. The dance couple received 22 points from the judges for their Viennese waltz routine.

For the Tenth place on the leader board were Actress and former The Celebrity Apprentice contestant Marilu Henner and pro dance partner Derek Hough. The couple received 21 points for their paso-doble routine

The last couple on the Dancing With The Stars leaderboard was the Iconic singer and producer Kenny “Babyface” Edmonds and his pro dance partner Allison Holker. They received 18 points, leaving them in the last place on the leaderboard. The dance couple also had a difficult time making their way around the dance stage while staying in one spotlight at a time.

The votes from the judges and from also the home viewer from Monday night’s performance on the TV Show will be added to determine which two dance couples will be eliminated during the upcoming Tuesday night results show at 8PM ET/PT on the ABC Network.