Another Dancing with the Stars elimination happened during Monday’s night’s episode of Dancing With The Stars season 23. Maureen McCormick and her professional partner Artem Chigvintsev was the sixth dance couple to be eliminated on the TV show on the ABC Network. 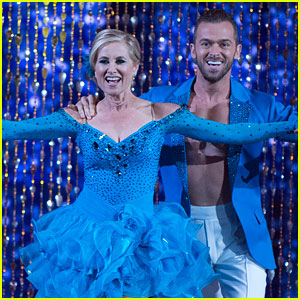 Following her ouster from the TV show, Maureen said…

“There were times when I felt like I was floating and so beautiful, and I never ever thought that that could be possible in the dance world. I mean, the crew, the coolest and most loving people work on this show. I love you guys!”

The dance pair landed in the middle of the Dancing With The Stars judges’ leaderboard in sixth place last week. The couple earned 31 out of 40 points from judges Carrie Ann Inaba, Julianne Hough and Bruno Tonioli as well as from guest judge Pitbull.

Another dance couple that was also in jeopardy prior to Maureen and Artem’s Dancing With The Stars Elimination was country singer Jana Kramer and partner Gleb Savchenko. However, the pair were not necessarily one of the bottom-two couples as a result of the judges’ scores and also America’s votes.

The theme of Monday night’s dancing with the stars broadcast was “Eras Night”. Where the dance couples got to dance across the decades, and were also each required to perform a routine that was inspired by a different era. The dance pairs, later on, were divided into two groups for freestyles in the “Team Dance” round.

First place on the Judge’s leaderboard was professional race car driver James Hinchcliffe with retired NFL wide receiver Calvin Johnson Jr. after they both got a total of 74 points out of 80 possible points from Carrie Ann, Julianne, Len Goodman, and Bruno.

James and his dance partner Sharna Burgess performed a 1940s jitterbug and received 36 out of 40 points from the judges in spite of Sharna’s recent knee injury from a bad fall.

James performed a Viennese waltz to a Scottish folk song, and also got 38 out of 40 points for the “Team Dance” round. James also served as the team captain of “Team Past.”

Calvin and his dance partner Lindsay Arnold danced first to a 1950s jive, and also received 36 points, and also a 38 point form the “Team Past” routine.

For the third place on the leaderboard turned out to be a three-way tie amongst Jana, Little Women: LA star Terra Jole, and also Olympic gold gymnast Laurie Hernandez with 69 total points.

Laurie Hernandez and her dance partner Val Chmerkovskiy initially performed a 1960s quickstep earning 34 points. The duo later took the dance stage with “Team Future,” and received an additional 35 points. Laurie also served as the team captain of “Team Future”, which created a routine with an apocalyptic feel.

Terra Jole and dance partner Sasha Farber’s danced first to a 1930s foxtrot and earned 34 points from the dancing with the stars judges. “Team Future’s” score of 35 points was also added to her original score.

Jana and Gleb also performed a 1970s samba and earned 34 points from the judges. The pair also followed that up with the “Team Future” routine, which added 35 points to their initial score.

For the sixth place on the judges leaderboard was Maureen and Artem and also Ryan Lochte and dance partner Cheryl Burke. Both dance couples earned a total of 66 points.

Maureen and Artem danced to a 1980s tango routine and earned 28 points from the dancing with the stars judges. The pair later danced with “Team Past,” which helped to boost their overall score.

Ryan Lochte and Cheryl first danced to a 1990s rumba and received 28 points from the judges. They also danced with “Team Past” which helped with their score.

Last in the eighth place and last place on the leaderboard was the dance pair Marilu Henner and dance partner Derek Hough with a total of 64 points.

Marilu Henner and Derek Hough first danced to a 1920s Charleston routine and got 29 points from the judges. Although the dance duo had a higher score than the couples that tied for sixth place on Monday night’s leaderboard in the first round, they belonged to the members of the losing “Team Future” on the Dancing with the Stars Elimination night on Monday night’s show.