Survivor 33 Millennials vs. Gen X castaway Lucy Huang was the latest survivor contestant to be voted off her Takali (Gen X) tribe during Wednesday night’s Episode 4 broadcast on the CBS Network. 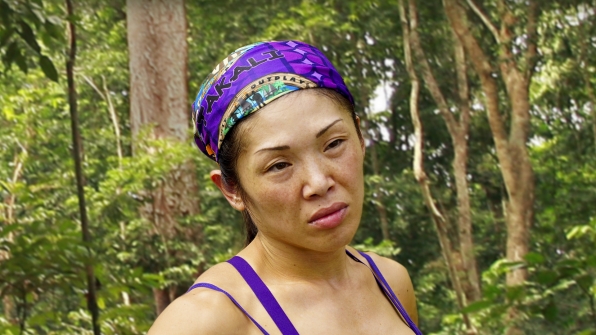 Lucy Huang, a 42-year-old dietitian from Diamond Bar, CA, became the fourth castaway to be voted out of Survivor Season 33 on Night 13 at the reality TV game’s fourth Tribal Council session.

Lucy’s tribe had to vote one of their members off after losing the game’s fourth Immunity Challenge to the opposing Vanua (Millennials) tribe. This resulted in in the older tribe’s third visit to Tribal Council.

Following her ouster, she said…

“I almost controlled the whole situation and it almost worked.”
“I wasn’t expecting [David Wright] to use the [hidden] immunity [idol], and I was quite shocked. Also, i just went full force and probably just should’ve taken it a little slower. That’s one of the lessons I just learned, unfortunately, a little too late.”

The Survivor Millennials vs. Gen X broadcast started on Night 10 at the Gen X tribe.

After Paul Wachter’s elimination from the reality TV show, Chris was “quite frankly pissed off” about the vote-off, and so he refused to talk to Jessica, who had was responsible for flipping on the majority alliance with Lucy and Sunday.

When the three women tried to explain that Paul was running the show and they couldn’t let that happen, the guys didn’t want to hear of it. Bret also showed his displeasure, and Jessica even feared she had made a mistake.

By Day 11, Lucy and Sunday were also in doubt whether the Paul vote-off was a bad move. Lucy also confessed that prior to Paul’s elimination, she never fully trusted Jessica although the guys did.

Since Lucy wanted to do something before Jessica toke control of the tribe, she told Bret and Chris that Jessica was “pulling all the strings” in the tribe. Bret also confessed how he didn’t trust Jessica at all. Lucy then suggested that they vote out Jessica next. Lucy had Sunday on her side, and also thought that she had Ken and David in her pocket.

On the other side, the Millennials tribe was struggling and starving.

When the Millennials tribe in Survivor 33 ran off to hunt a goat, Adam separated himself from his teammates in search for a hidden Immunity Idol.

After Mari Takahashi was voted off, Adam assumed he was next on the chopping block. And much to his surprise, he eventually got a clue to a hidden immunity idol, which was hidden in a strangely-shaped tree trunk. He was instructed to look for the immunity idol in a marked shell under a well-sheltered area.

On day 12, it became time for the two tribes to compete in a Reward Challenge.

The Survivor host Jeff Probst explained that the challenge involved two players from each tribe racing out to retrieve a ring, and then racing back to a flagpole with the opposing tribe members attempting to stop them with no rules in play. And the first person who put’s one hand in his or her tribe’s flagpole would win one point for the tribe.

The winner of this challenge would be the first tribe to earn three points. And the Reward will be in the form of steak, vegetables, sausages, and also spices.

After the reward challenge, Adam noted that he was not a strong physical player. He felt the needed to find the immunity idol even more. He found the idol after searching thoroughly but became worried Hannah saw him.

While the Gen X tribe enjoyed their food at camp, David went for a walk with Lucy since he wanted to vote with the majority. Lucy told him to vote out Jessica. She also told Ken the plan, and also demanding that talks to on one else about it.

Ken, on the other hand, didn’t like how Lucy gave them a list of rules and regulations to follow. Ken didn’t want the tribe to move from one dictator (Paul) to another.

The two tribes then met Jeff again for an Immunity Challenge, and the millennials sat out Adam.

For the immunity challenge, each tribe was required to have one tribe member race through a number of obstacles at a time and then sit on a bench that his or her tribe mates would hoist up and also maneuver in the air. The tribe mates sitting on the bench will have to collect numbers in order from 1-10 from a large board. And when successful, another tribe member must also race through the obstacles, collecting numbers 11-20. And the third person to go had to gather numbers 21-30.

Each of the numbers had a letter on the back. And when all 30 letters were removed from the board, the survivor 33 tribes had to figure out a phrase that the letters created. After a while, the millennials figured the phrase was, “Somebody loses their flame tonight,” making them the winner of the Immunity Challenge.

Back at the Gen X camp, the Survivor 33 Gen X castaway noted how it was a tough loss. Chris was not comfortable and didn’t know what was going to happen. However, he was counting on Lucy for a Jessica blindside. Lucy also assured him that she definitely had Ken and David onboard.

However, Ken warned David that teaming up with Chris, Bret, Lucy and Sunday, means going back to the bottom of that alliance again with CeCe. He suggested they work with Jessica and CeCe, with Sunday hopefully to take Lucy out. David thought it was a great plan.

After David told CeCe to vote Lucy out, Ken also warned Jessica that Lucy was after her and that neither Chris nor Bret trusted her. Jessica was shocked that she was being blamed for Paul’s elimination when it was a collective effort with the other girls. The thought of her own alliance trying to vote her off was such a surprise. She even worried that Ken was lying.

Jessica didn’t trust Ken, and so confronted Lucy about what Ken told her. Lucy was shocked and couldn’t believe that Ken would spill the plan to Jessica, saying it was a really dumb move.

After the confrontation between Jessica and Lucy, Ken felt totally betrayed by Jessica. He also had to explain to Lucy how he didn’t like her plan since she was very controlling and also demanding.

Lucy told the cameras that he (Ken) was “a snake.” She also realized that she could’ve been nicer to the guys, but also thought they could handle a little bluntness. And in a confessional, Lucy said that Ken was emotional “like a girl.”

During Tribal Council, Chris told the Survivor host Jeff that the state of the tribe was in “complete chaos.” Jessica also acknowledged that she hoped the alliance of five could reunite and keep working together. Lucy also announced that Ken was gunning for her, but wasn’t sure whether he had gathered enough votes to do send her off.

Jessica also then admitted that she was second-guessing her vote, but Chris was not.

After casting their votes, David decided to play his hidden Immunity Idol for Jessica. This move shocked everyone, especially Ken and Jessica. David told his tribemates that he was aware that the move would upset a lot of people.

Jessica was shocked the whole time since she couldn’t believe what had happened. Not only did her alliance/friends just betray her, but someone she was barely working with just saved her in the game since the votes cast against her didn’t count.

The survivor 33 episode closing credits later showed that Lucy, Chris, Bret, Sunday and Ken voted for Jessica. Jessica voted for CeCe. While David and CeCe voted for Lucy, which sent her packing.