During Monday’s night performance, another Dancing with the Stars elimination occurred. Marilu Henner and her professional partner Derek Hough became the eighth couple to be eliminated  on the ABC Network. 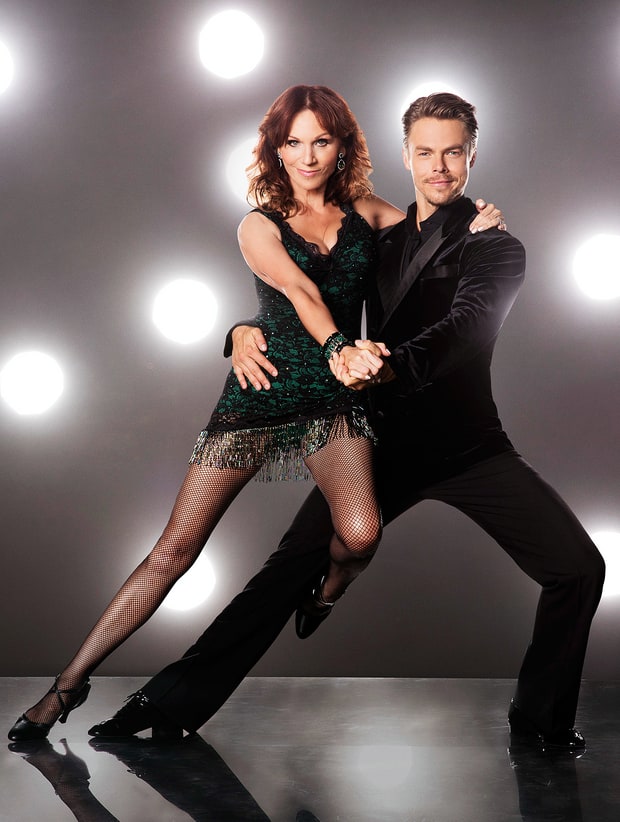 The dancing pair were eliminated based on the combination of Dancing with the Stars judges scores and also home viewer votes which was received during last week’s performance show.

Following her Dancing With The Stars Elimination, Marilu said..

The eliminated dance duo had landed consistently in the middle or towards the bottom of the Dancing With The Stars judges’ leaderboard each week leading up to their Dancing with the Stars Elimination.

Another couple in jeopardy for the Dancing with the Stars Elimination was singer Jana Kramer and partner Gleb Savchenko. But they were not necessarily one of the bottom-two couples based on judges’ scores and also viewers votes.

“Broadway Night” was the theme of Monday night’s broadcast, where each celebrity and professional pairing had to dance to a song from a hit Broadway musical and also participate in the “Team-Up Challenge.”

Actress and singer Idina Menzel also served as guest judge together with regular Dancing With The Stars judges Carrie Ann Inaba, Julianne Hough and Bruno Tonioli. The dance couples were trying to achieve a total score of 80 points for the night, that is 40 points in each of the two rounds.

Only two couples managed to get the total 80 points, Jana and Gleb together with Laurie Hernandez and partner Val Chmerkovskiy, tying in first place on the judges’ leaderboard. Jana and Gleb first performed a perfect-scoring waltz to Waitress despite the pro dancer’s knee injury.

Jana and Gleb danced first to a perfect-scoring waltz to Waitress in spite of the pro dancer’s knee injury. The Doctors had warned Gleb that inflammation and fluid was building up inside his knee, making it painful for him to dance.

The dance duo later got 40 points for their “Team Dance” same with Laurie and Val. The foursome (Jana and Gleb, Laurie and Val) dubbed as “Team Sisters,” amazed everyone with a contemporary routine. Laurie and Val took the dance stage initially with a perfect-scoring Argentine tango inspired by Chicago.

The third couple on the judges’ leaderboard was also a tie at 74 total points between Terra Jole and Calvin Johnson Jr.

Terra and his dance partner Sasha Farber’s Broadway dance was a Charleston and inspired by Sweet Charity. This earned them 38 points from the judges. The pair later followed that up with another jazz routine which earned them 36 points with fellow “Team Cubs” members Marilu and Derek for the second round.

Calvin and his dance partner Lindsay Arnold got 37 points from the judges first for their waltz to the song “Memory” from the show Cats, sung live by Leona Lewis.

Durig the “Team Dance,” Calvin and Lindsay danced a paso doble with James Hinchcliffe and temporary partner Jenna Johnson. The four of them, dubbed “Team Last Men Standing,” got an additional 37 points in this round.James and Jenna — who is filling in for

James and Jenna who is filling in for pro Sharna Burgess since her knee injury finished in fifth place on the leaderboard with a total of 73 points after performing a jazz routine which was inspired by The Wiz, earning 36 points from the Dancing With The Stars judges, and then did good with their team dance.

Sixth and last place on the judges leaderboard was Marilu and Derek with a total of 72 points.

The eliminated couples first danced a samba from Jersey Boys, which presently stars DWTS pro Mark Ballas on Broadway, and got 36 points from the judges. The couple also earned the same score for their “Team Cubs” performance.

Dancing with the Stars’ Season 23 semifinals will air next Monday night at 8PM ET/PT on the ABC Network.