Dancing with the Stars Dancers Amber Rose and her pro dancer partner Maksim Chmerkovskiy was eliminated during Monday night’s Dancing With The Stars Season 23 performance show on the ABC Network. 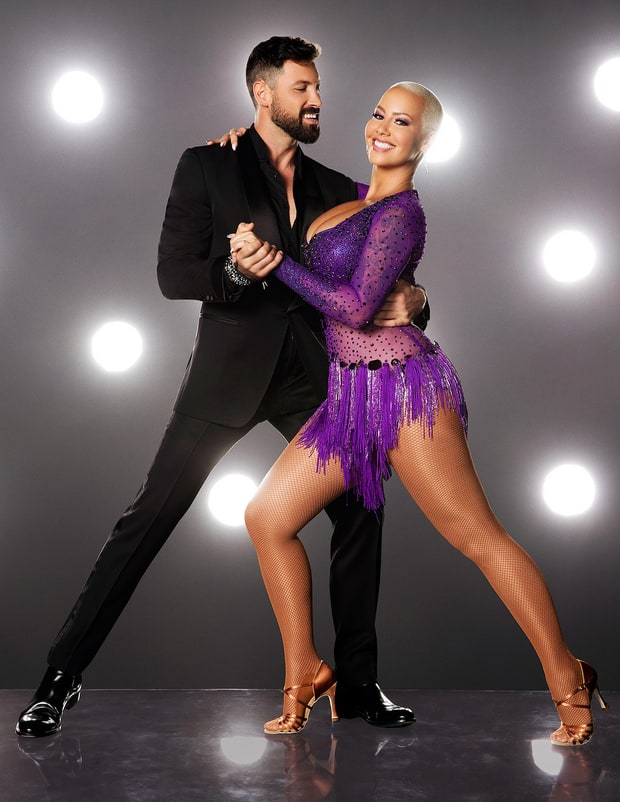 Model and talk show host Amber Rose and partner Maksim became the became the fifth Dancing With The Stars Dancers to be eliminated from the dance competition which was based on the combination of Dancing with the Stars judges’ scores and also home viewer votes which was received during last week’s performance on the TV show.

“It was such an amazing experience, and people don’t know this about me, but I’m really shy in a lot of ways and I think that showed on the ballroom floor. I think I tried my best. And thank you so much for having me here.”

Her dancer partner Maksim also added that he’s “so proud” of Amber and that she did “an amazing job” this season.Amber and Maksim tied for sixth place on the judges’ leaderboard last week with three other couples. They had earned 24 out of 30 points from Carrie Ann Inaba, Bruno

Calvin Johnson Jr. and his dance partner Lindsay Arnold was also the other couple that were in jeopardy on Monday night prior to Amber and Maksim’s elimination. But, based on the judges votes and also viewers votes, they were not necessarily one of the bottom-two couples.

Jana Kramer and dance partner Gleb Savchenko was able to top the judges leaderboard in first place with a perfect score of 40 out of 40 points for their Argentine tango.

For the second place was professional race car driver James Hinchcliffe and dancer partner Sharna Burgess. They earned 38 points for their rumba routine.

While Laurie and her partner Val took the stage with the salsa, Calvin and Lindsay danced an Argentine tango.

For fifth place was Marilu Henner and partner Derek Hough on the judges’ leaderboard. They earned 34 points for their cha cha routine.

Finshing sixth place on the leaderboard with 31 points was The Brady Bunch star Maureen McCormick and dance partner Artem Chigvintsev. The pair performed a samba routine.

While Terra and dance partner Sasha Farber danced the paso doble, Ryan and his partner performed a salsa routine.

Amber Rose and her partner Maksim finished the night in ninth place, and placed last on the judges’ leaderboard. The dance pair only received 28 points from the judges for their cha cha routine.