Another Survivor Millennials vs. Gen X castaway Jessica “Figgy” Figueroa was voted off her tribe during Wednesday night’s broadcast of Survivor Episode 6 on the CBS. Network. 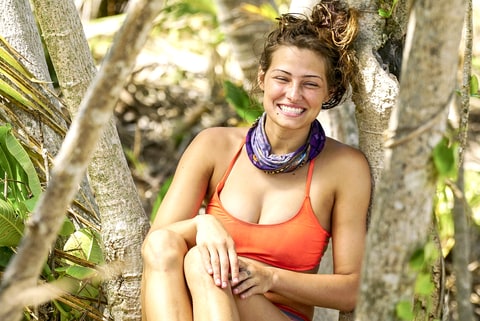 Survivor Millennials vs. Gen X castaway Figgy, 23 from Nashville, TN, became the sixth ccontestant to be voted out of Survivor Season 33 on Night 18 at the sixth Tribal Council of the reality TV game.

Figgy from the new Takali tribe, with a mix of Gen Xers and millennials, was voted off by her teammates after they lost the Immunity Challenge to the opposing Ikabula and Vanua tribes.

“I came in here with one speed, guns blazing. I was definitely a force to be reckoned with, so I guess it’s more if a compliment to be taken out right now, because otherwise, I probably would’ve taken out every single one of them.”

“So I’m not disappointed in my game at all, but I’m definitely bummed that I won’t get to be around [Taylor Stocker]. ‘Figtails‘ will probably be reunited one day but just not anytime soon.”

The broadcast of Survivor Millennials vs. Gen X episode 6 began at the Vanua’s camp on Night 15 just after the Gen Xers turned on Ciandre “CeCe” Taylor and voted her out at the Tribal Council.

David said that voting CeCe off was “absolutely the right thing to do” and that going forward, the tribe will begin to work with people whom they really trust. Zeke on the other hand though it funny how the Gen Xers sent home one of their own even when they had the majority over the millennials.

The Survivor Millennials vs. Gen X episode then moved to Day 16 at the new Ikabula tribe.

Jay then went looking for a hidden Immunity Idol and found a symbol of his tribe stamped on a piece of bamboo. Upon ripping it open, he found the idol, and shared the good news with Will. “Mom, you just got one step closer to getting a house,” Jay told the cameras.

Talking to the cameras, Jay said.. “Mom, you just got one step closer to getting a house.”

When Michaela walked up to the guys as they were celebrating the idol find, they had to tell her about it. Jay said that Michaela was one of his allies, and even though she intended to keep quiet about Jay’s idol, she also admitted that she’d have no problem snitching on him if it came down to it.

The three tribes then gathered together and met Survivor host Jeff Probst for a Reward Challenge.

For the Reward Challenge, Survivor host Jeff instructed each tribe to pick “a caller.” The rest of the tribe was blindfolded, and listened to Figgy’s verbal commands, and they had to find and collect four sets of puzzle pieces. Once the caller directs any tribe member to a table, that blindfolded person will have to solve a puzzle based solely on the caller’s verbal instructions. The first tribe to finish the challenge would win Reward in the form of apple pie, cookies, brownies, iced tea and cold milk. The second tribe to finish would be allowed to eat some chocolate chip cookies.

The first tribe to finish the challenge would win Reward in the form of cookies, apple pie, brownies, cold milk and iced tea. And the second tribe to finish would also be allowed to eat some chocolate chip cookies.

In the end, Vanua won and Ikabula finished in second place.

Back at the Vanua’s camp, Zeke noted that he was on the bottom of the millennials, and was considering taking Michelle out. Zeke also thought that taking Michelle would be fine since she had been “plotting” against him before and also had strong ties to Figgy and Taylor.

Zeke was also wondering if he needed to give up on the millennials tribe in general.

On Day 18 of the reality TV show, the three tribes met Jeff again for the season’s sixth Immunity Challenge.

Jeff explained to them that each tribe must race across a series of balance beams, collecting bags of coconuts and then bring them up the beach. And once any tribe  had six bags of coconuts, they could open them to find three balls. Two players on each of the three tribes must then maneuver those balls through a table maze. The first two tribes to land all three balls at the end of the maze would win immunity. Adam sat out for

The first two tribes to land all three balls at the end of the maze would win the Survivor Millennials vs. Gen X immunity challenge.

The new Takali tribe once again, had a huge lead in the immunity challenge. Jessica and Figgy worked on the maze together, which made the tribe excited about their “huge time advantage.”

However, Hannah and Michaela worked very well together, while Michelle and Zeke also also made up some time by working well as a pair.

The Ikabula tribe won first place by landing all three of the balls at the end of the maze. Vanua finished in second place after Michaela encouraged them and gave them some hints on how to finish the maze faster.

Michaela announced in front of everyone that she wants the millennials to stick together, and that was why she helped Vanua. She also explained she didn’t feel the need to help Takali since they had a majority of three millennials vs two Gen Xers.

Back at the Takali’s camp after the challenge, Figgy said if the millennials were smart, they’d work as a team to take out the Gen Xers.

Adam also realized he was the swing vote between the millennials and Gen X. He also had a choice to either side with Figgy and Taylor or Ken and Jessica. Adam also talked to Figgy about taking Ken out, and refered to him as “a dangerous player” and when the merge comes, he’ll be a threat in the challenges.

Taylor had some worries that Adam might double cross him and be smarter than they thought he was. Taylor didn’t trust anyone but Figgy.

Adam also warned Jessica that the millennials were going after Ken, but she told him she needed him since they had each other’s backs. Jessica then told Ken to convince Adam, and that he would never write his name down and he was safe with them.

Ken told Adam that going forward with Taylor and Figgy means staying at the bottom of the alliance with a power couple.

At Tribal Council on Night 18 of Survivor Millennials vs. Gen X, Figgy revealed that even though Adam voted for her at the first Tribal Council, she forgave him and forgot about it.

Taylor also told Survivor Host Jeff that he and Figgy really liked each other but that “love” is a really strong word. Figgy told the tribe that they are just two people voting together, just like Jessica and Ken. She also insisted that she didn’t appear on Survivor just for a showmance, stating that she and Taylor were still being strategic with every move they made.

When Jeff revealed the votes, it went in the following order: Ken, Figgy, Ken, Figgy and Figgy.

“I’ll explain, if I can,” Adam told Taylor, who gave his tribemate the angry stare.

After the vote, Survivor Millennials vs. Gen X castaway Figgy cried on her way out and also wished Taylor good luck.